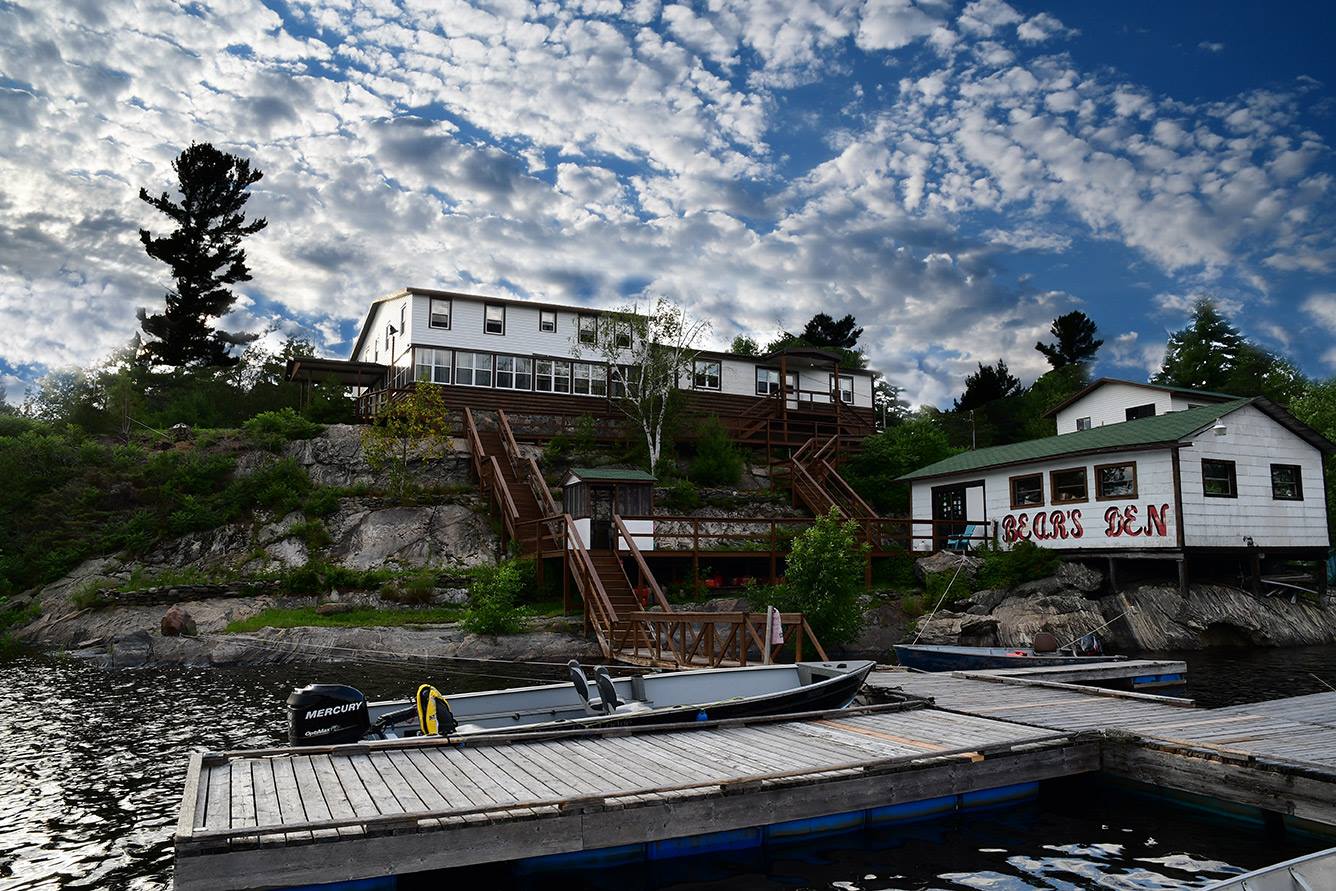 Bear’s Den Lodge: An Inspiration to Live a Dream

Bear’s Den Lodge, a number one tourism full-service business in the French River, Municipality of Killarney area, has gone through a major transformation over the past 35 years. Since 1986, the daily operations and maintenance at the lodge located along Highway 69 now 400 North in Alban, Ontario have been managed by owners Art and Brenda Barefoot, along with their son, Joe Barefoot.

The Lodge owners were born in two neighboring small rural communities in Southern PA and each were raised in large families. Their families were well-versed in traditional farming, housekeeping, and banking. When Art & Brenda Barefoot were married — fishing, hunting, farming, and foraging became part of the new family’s way of life.

Long hours and days away from each other lead the Barefoots to seeking an opportunity of hard work to their own entrepreneurial endeavors. Art was well established in the banking industry as a businessman, but his love for the out of doors tore at his heart to be outdoors and beyond the walls of corporate life. Brenda’s love for service and hospitality as an Administrator of Long-Term Care supported her decision to purchase the Bear’s Den Lodge property and relocate their talents to the hospitality and tourism industry to disconnected from the daily life of a corporate scene.

According to Barefoots, purchasing a property that has existed since 1925 and maintaining it has been more of a challenge than they originally anticipated. The property has required many repairs, rebuilds, and improvements over the past 35 years of ownership. The business went through three previous bankruptcies and was not operated by the previous owner in the six years prior to the Barefoots’ purchase in 1986. Marketing campaigns had to be made in order to establish new clients for the recently reopened Lodge.

Early on, many investments were “behind the scenes” improvements that helped improve the cosmetics and integrity of the buildings. Art spent the first-year scrapping and painting the structures.  He laughs about the 120 imperial gallons of paint that he applied with much sweat and energy while also being responsible for the cooking, guiding, and housekeeping required for the full-service resort.  In order to be successful, the pair decided that Brenda would continue to work for a stable income as a Nursing Home Administrator and do all the necessary administration for Bear’s Den Lodge from a distance.  Many late nights and weekends were spent working and traveling.  There were times even where they rented their own bedroom if it meant keeping the lights on. The Barefoots were blessed to met their monthly mortgage during the early years and purchased two cedar strip boats with 15 hp motors.

Art remembers the days where everything leaked and was broken. Turning the water on in the main lodge was like having a sprinkler system installed. The landscape was barren with broken pipes, glass and various other construction material scatted like a junk yard. There was hardly a path to the main lodge and forest slowly creeping onto the abandoned property to reclaim it. They knew with hard work they could see the dream come alive despite the lack of encouragement by others around them.  This only made the Barefoots work that much harder to succeed.

The first year was a tough year. An uninvested partner caused major damage to the Lodge’s bass boat, the marina’s taxi boat, and cleaned out the cash register after cutting waterlines throughout the property before quitting.  The next party down river was always the enticement instead of working or helping with customers.  Lessons were learned, but the Barefoots survived the disaster.

Originally, the Bear Cub cottage was the only cottage on the Bear’s Den property that could be rented.  Soon after, the Hilltop (current day Eagle’s Nest cottage) was opened. The following year the Birches – a one-bedroom cottage was remodelled to include a new kitchen and washroom. One of the finest cottages on the entire French River.

Progress was slow, but steady. Guests arrived and believed in our business when others did not. They became a part of the Bear’s Den family and started retuning year after year and sharing their love of the French River with others.  To this day, our original groups still come with some returning to share stories from the past 58 years, never missing a trip to the famous Lower French River Delta.

Today, Bear’s Den Lodge’s accommodations include a rustic charming main lodge with a central large room; including a fireplace plus six recently-remodeled guest rooms. The property has grown from the original 3 cottages to the current 6 cottages. Each cottages’ size ranges from family-sized to romantic options for just two.

In June 1989, Art landed the dream freshwater fish:  why he purchased Bear’s Den Lodge. His 14lb. Line Class World Record Muskie that proudly displayed on the mantle of the main lodge.  The fish weighing in at 59 lbs. 10 oz. and 59 inches long bearing a girth of 29 inches. A monster and trophy to behold.  Also, on display are many other fish, deer and wildlife mounts collected by the various guests.  A majestic “museum on the French River” where locals and visitors stop to see the famous “wall” showcasing a gallery of historical photographs and illustrations of the area.

Our family started to grow in the mid to late 90’s and produced a charming son and a lovely daughter. Family life took on a different meaning with late nights, car races in the kitchen and Joe’s first muskie caught off the dock.  Adventures began while exploring a new chapter in our lives as we continued to build our future.

The French River was designated the First Canadian Heritage River in 1968.

“The 110 km French River was the first river to be designated to the Canadian Heritage Rivers System in 1986 in recognition of its cultural significance as a travel and trade route to Aboriginal peoples as well as during the Voyageur and fur trade eras. The designation also recognizes its outstanding natural and recreational values.” The area is home of the largest Virginia Chain Fern in Canada.  The French River is managed under Ontario Parks as the French River Provincial Park.

During this time the river took on even more meaning; an investment for the future to protect our guests and family trust creating sustainability. Days were spent protecting and educating our neighbors, local community and guests. Bear’s Den Lodge worked with the Ministry of Natural Resources that included a walleye hatchery program, muskie tagging, doing biological research and collecting data to create the first slot limits in Ontario.  Our first meeting that Art and I suggested a catch and release size occurred 6 pm in the kitchen of another local lodge while having 3 other lodge owners buy into the concept.  3 lodge owners agreed to peruse the fish concept who then sought the support of developing the Fishery Management Committee of the French River Resorts Association.  Now 27 years later and the research speaks for itself.  Ontario used the successful concept province wide several years ago while continuing to watch our abundance of walleye, pike, large and smallmouth bass, and monster muskies increase in quality and quantity.  In 2019, Bear’s Den Lodge produced 13 muskies over 50 inches while other monsters got away.

In more recent years, we have been able to invest in ways that improve the aesthetic of the Lodge along with increased services provided.  A major overhaul and rebuilding of most of the cottage structures were completed now almost 25 years ago. However, there are always a need for upgrades or general maintenance to keep us busy.

Each of the newer Cottages includes a bedroom with a double bed, a living room, kitchen and bathroom fully equipped along with a propane BBQ on each private deck. The outdoor deck was also uniquely crafted to encourage outdoor space experiences.

A large boat livery servicing the property and the visitors, campers, and local cottages along with the boat rentals for French River Provincial Park, lower French River increases to now include canoes and a kayak.  Handmade lures were crafted and included for a large tackle and gift shop for the French River area.

While Art noted there were some surprises along the way – one being the demolition and rebuilding of docks. There were entire walkways and staircases needed to be replaced due to a compromised foundation. It was also decided that an outdoor deck would be a great finishing touch to the exterior façade near the tackle shop. A fish cleaning station with water and lights were added along with a structural bridge to function at varying water levels for the floating dock.

Executive Chef, Art and his family have put a great deal of energy into their dining room. The Lodge offers well-noted tasting home made dinners, extending packaged services to corporate retreats and family celebrations. Art is a master butcher and his culinary expertise leaves memories and everlasting mouth-watering desire to return for more.

It was important to Brenda to be able to offer a better atmosphere for her and her culinary team to work in. She developed a design that would support her garden to table efforts in the late 80’s. In 1991, a first in the industry, a UV Light system was installed to purify the water.

New windows and siding now garnish the main lodge adding comfort for the guests. New blinds have been added giving the dining room a 180-degree breathtaking view of the Bear’s Den Bay while guests enjoy their meals.

I, Brenda Barefoot love history.  In fact, the first thing I do before investing or creating a new product is study our company’s past performance.  This exercise provides clarity on the value and quality of our company. I believe that understanding our area’s history helps others choose to see the French River and invest in the future they will love.

As with any transition, adversity is bound to strike. The process could not have been possible without the diligence and support of a dedicated team, loyal employees, and a family that sticks together through life’s challenges. And we have seen our challenges.

Rural Ontario is not for the Faint at Heart

I once said that “building a business in rural Ontario is not for the faint at heart, it takes a special person to endure, be skilled, knowledgeable, a counselor and educator to strive to create the best experiences our customers deserve.”  Most have become family and we look forward to creating more memories where they can call it home.

We love sharing our favorite places with our guests. We are advocates to promote the tourism industry in Northeastern Ontario and help within the community by sourcing products and food from local businesses.  We support the growth of other small businesses like us.

Better Than the Finery Bear’s Den Lodge Has Known

While all of the updates, improvements, and changes have allowed Barefoots to offer even better experiences for their guests, the heart of the business has remained the same: a family business that strives to invest back into the business and the local community. Where living the dream has occurred.

Mr. William Palmer (the previous owner of Bear’s Den Lodge) once said with pride, “You, the Barefoots have returned Bear’s Den Lodge to its glory and better than the finery it has known.”