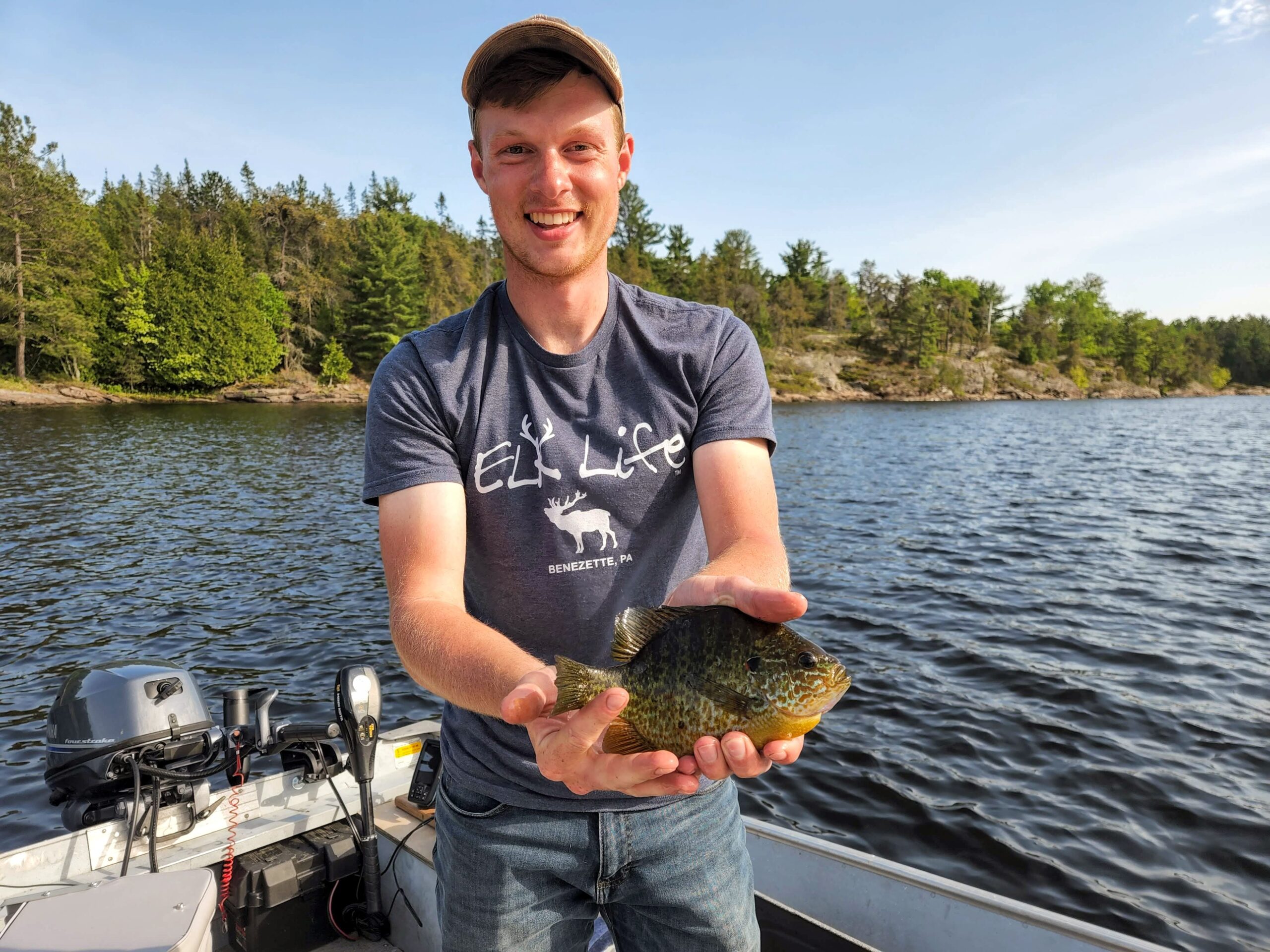 One of the most popular freshwater fish species in North America, are different members of the Sunfish (Centrarchidae) family that come in a huge collection of shapes, colours and sizes. Because of similarities between other members in the Lepomis genus, they can adopt similar names such as: Bluegill, Sunfish, Stumpknocker, “Sunny”, Bream, Brim, Copper Nose, Copperbelly, and Pond Perch. Currently there are 13 distinct members of the Lepomis genus in North America, with all members being able to hybridise with each other — resulting in sterile offspring.

The most recognizable and popular panfish to Canada and the United States is the Bluegill. They will vary in colour more than any other Sunfish. Their basic body colour ranges from yellow to dark blue. A Bluegill’s sides are marked by 6 – 8 vertical, irregular bars. Distinguishing features of adult Bluegill are: a broad black gill flap with no trim, a black blotch on the dorsal fin and a long pointed pectoral fin. A notable feature is that a Bluegill’s mouth does not extend beyond their eye.

The original distribution of Bluegill was from Minnesota through the Great Lakes region, Southern Ontario & Quebec, Lake Champlain on the East, South to Georgia and as far as Arkansas to the West. However, with time and use in farm ponds they thrive in most States and Provinces. Bluegill have also grown in popularity as a pet. This also led to them being an invasive species in Japan among other parts of the world.

The diet of Bluegill is rather simple. Anything they can safely sample and fit in their mouth they’ll eat. This has led to Bluegill becoming omnivorous with their diet consisting primarily of insects and aquatic vegetation throughout their lives. Bluegill have small terminal mouths with fine needle-like teeth, well adapted for feeding in the upper and midwater sections of rivers, bays and lakes. As they grow larger, Bluegill proceed to devour larger forms of insects and crustaceans. They also begin to feed on soft prey such as: fish eggs (including rival bluegills), amphibian eggs and smaller fish. During the summer months a Bluegill can consume up to 35% of their body weight in a week to grow and prepare for winter. During the winter they consume up to 1% of their body weight per week.

During daytime, young Bluegills are found closer to shore in coves under an overhanging limb or under a dock. Larger members prefer being near deeper waters during daylight and move to shallower areas during morning and evening for feeding.

When a Bluegill doesn’t need to feed, hide or relocate with changing water temperatures and levels; they proceed to nest. Because of constant threats from predators, this species tends to spawn several times throughout the season. Spawning for Bluegill occurs around late May when water temperatures are near 19.5℃ (67℉) and can continue through the season into September.

When a Bluegill reaches 2 – 4 years old or grows to 3 inches (7.62 centimetres) they become capable of spawning. Research from the University of Windsor indicates, male Bluegills reach parental maturity at age 7 in Ontario, Canada. Mature male Bluegills create saucer-like nests near shallow areas with sand and gravel. While the older males vigorously guard their nests from younger males, prospective females (age 4 and older) choose their partners. Spawning typically happens over the course of a day with the female Bluegill laying as many as 38,000 eggs. The future Bluegill are protected by the parental male for a duration that can last as long as 7 – 10 days. During this period, Bluegill eggs hatch within 2 – 5 days from spawn under optimal weather conditions.

Bluegill are perhaps one of the most sought-after panfish, along with perch and catfish. They’re an excellent sport among young and inexperienced anglers wanting to learn how to fish. Bluegill are even fun to catch on fly fishing rods. While not as spectacular of a fight as their larger cousins, like the Largemouth Bass, Bluegill will bite on any small bait — artificial or natural and can be floating or sinking. During their fight, Bluegills will resist vigorously by swimming at right angles against your pull and seek opportunities to escape into cover while reeling in.

The Pumpkinseed or Common Sunfish, is a popular freshwater panfish among young anglers. Many anglers in Ontario and Northern United States started their long careers thanks to the tenacity of the Pumpkinseed. They are easily caught and have a distinct appearance. Unlike Bluegills, Pumpkinseeds have rigid black gill covers with a bright red or orange spot on the tip. Their body is a light olive green with varied coloured spots that give a distinct “Sunny” glow in the light. Emerald-blue lines radiate from their mouth to the end of the Pumpkinseed’s gill plate, creating a visual sort of war paint. When distressed, darker vertical bars will appear on their body helping them hide in vegetation. Young Pumpkinseed have a yellow belly which aids in identification from young Bluegill.

Pumpkinseed Sunfish were originally distributed from the Dakotas East to the Maritime Provinces of Canada; South along the Atlantic Coast to Northern Georgia and in the Mississippi River system from Western Pennsylvania to Iowa. However, they were later introduced to other Provinces and States in North America. Due to their bright and vibrant colouration, along with ease to manage, this led to their popularity for being a pet and invasive species. According to the CABI Invasive Species Compendium, Pumpkinseed were introduced to Europe around the 1800s. They’re currently in 28 European and Asian Minor Countries, along with Brazil and possibly Chile. In the European Union, Pumpkinseed was added to the “List of Invasive Alien Species of Union Concern” on the 15th August, 2019.

Like Bluegill, Pumpkinseed would inhabit standing waters with soft bottoms and aquatic vegetation, downfall or rocky cover. Pumpkinseed preferred hiding spots are weed patches, docks and logs. Unlike Bluegill, the larger Pumpkinseed are not as willing to be in the open water.

While Pumpkinseed are omnivorous, they are more carnivorous than Bluegill.  Despite being a smaller member of the Sunfish family, they feed primarily on the surface and bottom of lakes, bays and rivers. Their primary diet consists of: small mollusks, insects, crustaceans, minnow fry, leeches, small frogs and tadpoles, and even cannibalising smaller Pumpkinseed. Some biologists believe a Pumpkinseed’s diet consists more of small fish than Bluegill. Therefore, reducing chances of a stunted population within the colony by eating their own young. Pumpkinseed will also eat aquatic vegetation, but to a lesser extent than Bluegill.

Pumpkinseed, like other members of the Sunfish family, prefer clearer to slightly turbid waters that are cool to moderately warm water. Unlike Bluegill, Pumpkinseed are less tolerant of warmer water temperatures; they can tolerate lower oxygen levels than Bluegill. Their preferred temperature range is 21℃ – 24℃ (69.8℉ – 75.2℉) and can tolerate up to 31.7℃ (89℉).

Pumpkinseed are similar to Bluegill when spawning and at similar times. They will start spawning around 17℃ – 26℃ (62.6℉ – 78.8℉). Pumpkinseed Sunfish maintain larger territories than Bluegill. However, Pumpkinseed will colonise with Bluegill and even form nests within Bluegill colonies. Parentally mature Pumpkinseed will use their tail fins to sweep an area in shallow water; forming oval-shaped nests, almost twice the length of the fish, in sand and small stoney gravel sections of water during May to August.

Each Pumpkinseed nest usually contains several thousand eggs deposited by one or more females depending on how enticing their mate is. Depending on size and age, a mature female Pumpkinseed (typically 2 – 3 years old) is estimated to lay between 1,500 to 1,700 eggs a spawn and up to 7,000 eggs within a season. After spawning, the Pumpkinseed eggs will incubate for 3 – 10 days. The parental male will guard the nest for at least the first 11 days or until the Pumpkinseed fry are free swimming.

Larval Pumpkinseed after hatching appear ghostly as their bodies are transparent and their eyes will lack pigmentation. The larval fish will stick close to the bottom of the nest while their eyes further develop within the first 48-hours. During which, the parental male Pumpkinseed will return the young fish in his mouth should they wander from the nest.

Once the young Pumpkinseed are able to fend for themselves, they will remain in the shallows near the breeding area among groups of young fish for the first year. On average, Pumpkinseed Sunfish will grow 1.27 – 7.62 centimetres (0.5 – 3 inches) for the first year and reach maturity within the second. The adults will travel in slightly deeper yet still covered waters in groups of 2 – 4. Pumpkinseeds are active during the day feeding at all depths of water before resting on bottom, or in protected areas at night. In many waters, it can take six-years before a Pumpkinseed exceeds 15 centimetres (6 inches).

Their average lifespan in the wild is 5 – 8 years, but have been recorded to live upto 12 years in captivity. During which, they contribute greatly to the food chain by eliminating pesky mosquito larvae while being food for other predator fish and animals.

Pumpkinseed are an interesting panfish. They’re aggressive feeders and will greedily take a variety of light-baits they can wrap their mouths around. Perhaps the most traditional and simplest way to catch a Pumpkinseed is to use the classic nightcrawler. Though other insects and grubs can be used. Pumpkinseed will even feed on bread pieces if soaked in oil and salted for a tasty treat. They fight in a similar manner to Bluegill when reeling them in. Pumpkinseed among other Sunfish are great for future Canadian anglers to Experience Fishing.