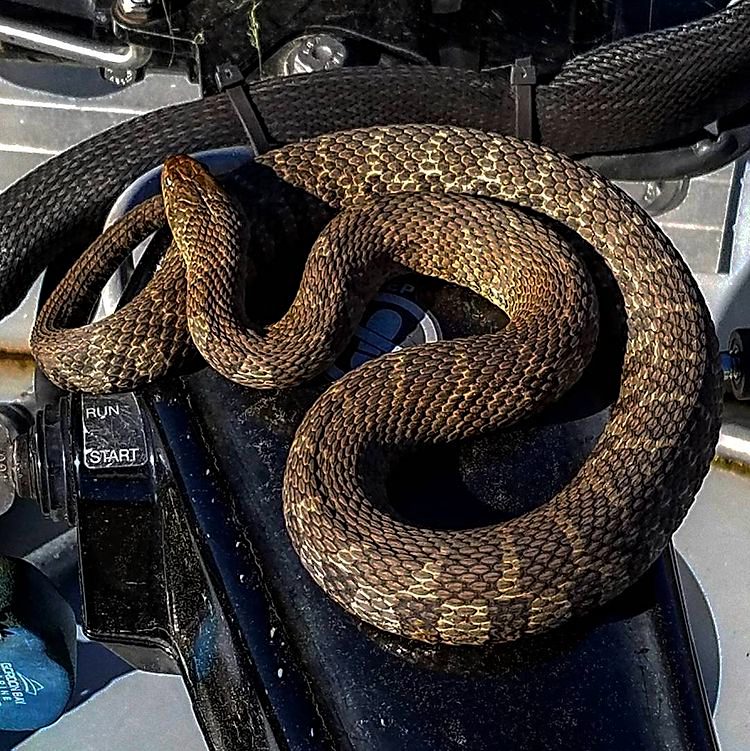 Vacant and cold reptilian eyes with reflexes that can lunge themselves half a foot in 70 milliseconds. Snakes have captured our thoughts, imaginations and even stories since their first appearance approximately 128 million years ago.

Whatever your thoughts are, they are fascinating creatures. They come in many appearances and varieties of venomous and nonvenomous species. In Ontario, Canada there is one variety of venomous snake, the Massasauga Rattlesnake. Though, they are often confused with its nonvenomous cousins: the Northern Watersnake, Eastern Hog-Nosed Snake, Eastern Milksnake and Eastern Foxsnake. The latter two of which will even mimic the rattling action of the Massasauga to discourage potential threats.

On the Lower French River, the two most likely species you can encounter are the Northern Watersnake and the Massasauga Rattlesnake.

Fear not, most people will never witness a Massasauga Rattlesnake in the French River Provincial Park. This is due to their timid nature and aversion to humans. They will hide or run unless they feel the need to rattle when a person gets too close.

An adult Massasauga can grow to 75 centimetres (30 inches) long. They have a striking distance of 30 centimetres (about a third of their body length). Their body is brownish-tan coloured with darker brown spots in the shape of saddles or butterflies along their back. There’s also smaller brown splotches along their sides. The Massasauga also have dark black bellies with scattered light markings. Their scales will be keeled down towards their bellies, giving them a rougher and duller appearance.

Their pupils are slitted like cat eyes. Other Ontario snakes will have rounded pupils. Their trademark appearance is the lighter brown jointed tail, giving the rattlesnake their namesake. The rattle can be an indicator of a snake’s age. Each segment is composed of dead skin that rubs against itself creating a bee-like buzz. However, be mindful while this is the easiest method to identify the snake their rattle can break off.

Other notable characteristics include an arrow or triangular shaped head. The reason for this is the venom sacks that give the head a distinct shape from its slender body. The Massasauga Rattlesnake also has three distinct stripes running along each side of its head. They also have heat sensitive pits between the eyes and nostrils. But, if you’re seeing this feature without a camera – you’re too close to the snake!

Unlike the Northern Watersnake, the Massasauga will swim on top of the water.

The Massasauga Rattlesnake will not bite unless it’s their last resort. In Ontario, snake bites are rare with 2 – 3 cases each year. Venom takes large amounts of energy for the snake to produce. Because of this, they often refrain from biting or envenoming. Older snakes have better control over their glans than juveniles and thus inject lower dosages.

If you’ve been bitten, toxicity is non-lethal with proper treatment. Some individuals may experience allergic reactions. In either case, seek a medical professional immediately. They will decide if you need anti-venom. Only 2 people in Ontario have ever died from a Massasauga Rattlesnake with the last being over 40 years ago.

Originally, the Massasauga Rattlesnake was primarily located in Southwestern Ontario. Though due to human activity and changes in weather, the population has migrated Northeastern following the coast of the Great Lakes.

The species is considered “Endangered” under the Ontario’s Endangered Species Act (2007). They’re also listed as “Threatened” by federal government’s Species At Risk Act and “Specially Protected Reptile” by Ontario Fish & Wildlife Conservation Act. In other words, there are dedicated zones for the snakes, most of which live within Ontario Parks. Technical research by the Ontario Government outlines limitations of alterations to the snake’s gestation sites (breeding grounds) and overwintering sites (snake dens).

Often confused for their similar appearance in colours, the Northern Watersnake thrives in the French River Provincial Park. Most anglers can often find these snakes hunting near shorelines. Sometimes giving you a morning surprise as they’re curled happily around your outboard motor wanting to go fishing with you!

Jokes aside, they’re odd compared to most snakes. They have a natural curiosity and while not fearless, they often don’t feel threatened by humans. I have had personal experiences while fishing, where they climbed over the transom of the boat wanting to warm up on the deck or escape a fish. Most of the time though – they will dive, hide or swim away for safety if they feel slightly threatened.

Northern Watersnakes come in darker browns to almost black colours. Unlike a Massasauga, Watersnakes have a dark (sometimes reddish) horizontal banding that wraps around the top of their back and down the sides of the snake. When young, the Watersnake can appear grayish with brownish bands and grow darker with age. Their bellies are lighter coloured ranging from white to tan.

Their heads are more oval shaped than a Massasauga and more naturally follows their slender body. Like other non-venomous snakes, their pupils are rounded. Adult Watersnakes can grow larger than Massasaugas – up to 110 centimetres. Speaking of non-venomous, their saliva does have a mild anticoagulant – causing the bite to bleed longer. Yet, they rarely bite people and only in self-defence.

While both species can swim in water, the Northern Watersnake swims with only its head out of the water. The rest of its body stays submerged as it uses its tail as a paddle to propel itself. The snake even has the ability to dive and hunt underwater for extended periods.

Being more aquatic, Northern Watersnakes are found in any permanent body of freshwater in Ontario. Their diet primarily consists of fish and amphibians. They are considered a species “Not At Risk” by various government bodies in Canada.

During the spring and summer months, they are often spotted sometimes in large groups around: rocks, logs, vegetation and shorelines. Before winter, the Watersnake will hibernate in dens, crevices and even beaver huts.

Knowing the differences between Massasauga Rattlesnakes and Northern Watersnakes will help you during your next visit to Ontario Parks. Being able to identify between the species helps with conservation and safety in the outdoors. If you spot a rattlesnake while camping in the French River  Provincial Park, be sure to keep your distance. You’re the bigger creature and you scare them as easily! Take a picture from a safe distance. Reporting your findings to the Ontario government helps researchers. If needed, Ontario Park staff will relocate the snake.

We want to preserve Ontario’s diverse ecosystem. Snakes and amphibians are a great indicator of a healthy Georgian Bay Biosphere..

Article by: Joe Barefoot, M.B. – Published Outdoor Writer and Photographer with over 15 years of experience in the outdoor tourism industry.

For additional information about Ontario’s Massasauga Rattlesnakes: A great video and article by journalist, Lexy Benedic of the Weather Network. See the video and read her article here.