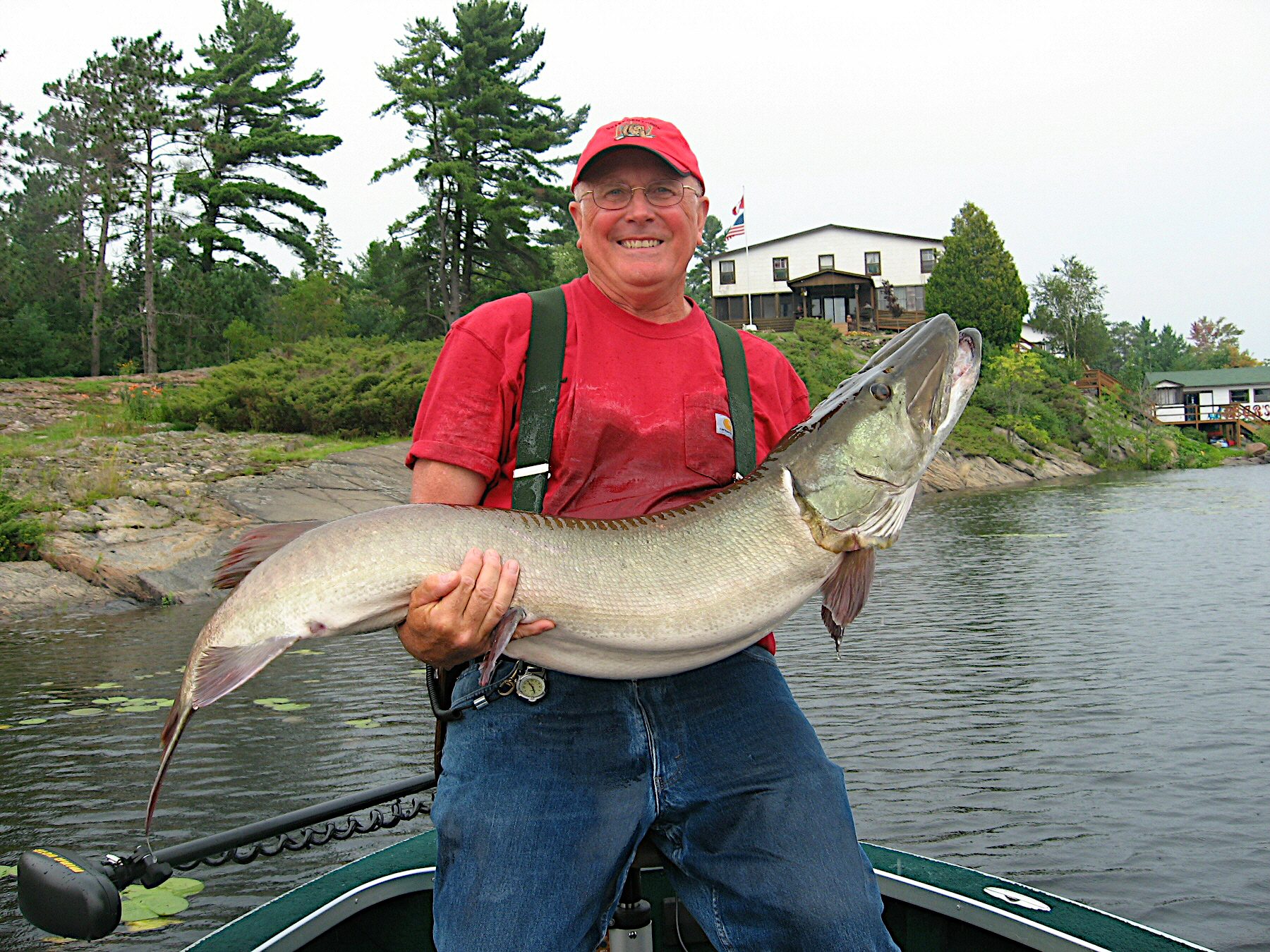 Muskie and Northern Pike are North America’s two favourite trophy game fish. Both swim silently through the turbid waters of the French River, Ontario. Before exploding into action, striking unsuspecting prey from cover. At a glance, these two slender and toothy apex freshwater predators can be easily mistaken for the other.

Just like walleye and sauger, identifying subtle differences between “Muskie vs Northern Pike” is key to understanding their respective habitats.

Are Muskie and Pike the Same?

In short, no. Despite their slimy disposition, Northern Pike and Muskie are only close relatives. Both species are from the genus “Esox” along with other members of the Pike family such as Amur Pike, Chain Pickerel and Southern Pike. They are all different species or “cousins” with different behaviours, markings, temperaments and distributions.

How to Spot the Differences?

There are three physical indicators to determine if you’ve landed a Muskie or a Pike:

Fishing in Ontario, Muskie have a few different strains that can differ in patterns and markings. The first is colour, Muskie can be “clear,” with few spots on a greenish-silvery body. Typically, “clear” Muskie are devoid of pattern but at times can have markings near the posterior part of their body.

Next, Muskies also can have barred coloration with dark green vertical stripes set against a lighter green background colour. The barred pattern is perfect for these ambush predators camouflaging themselves in underwater weeds.

The last pattern a Muskie has is a spotted pattern. Spotted Muskies will have distinct spots present on the gill plates and their entire body. Spotted Muskies are often misidentified with Northern Pike because of their spottiness. However, to differentiate the two species Northern Pike have a more uniform “chain-link” spotted pattern unlike a spotted Muskie’s random splotching. There’s also a difference in head and tail shape as explained below.

Unlike Muskie which come in a wider variety of colour patterns, Northern Pike are more uniformly coloured. They are usually brighter coloured than Muskie with white, yellow-tinged or cream-coloured markings. As mentioned earlier, Northern Pike’s spots are more uninform to create a sort of “chain-linked” lateral pattern on their olive-green skin. Their backs are normally a solid dark green to almost black making them hard to spot in turbid water.

Perhaps the easiest way to distinguish a Muskie from a Pike is to identify the tail. Both species have forked tails, however, a Muskie’s tail has a predominate pointed fork. Whereas, a Northern Pike will have more rounded tips. A Muskie’s tail is usually brownish-orange to almost reddish colour to its fin’s tips with dark spots. While, a Northern Pike’s tail is lighter coloured. Often being a light greenish-yellowish colour or orangish at the base and turning white at the tips of their tail with dark bars mixed in.

While not recommended on larger fish, if all else fails, you can gently turn the fish over and look at the underside of its jaw. Pike and Muskie’s pores sense vibrations and detect movement in the water. Pike have 4–5 pores on each side, Muskie have 6–9. Again, this is not recommended on larger trophy fish as you could bruise vital organs and risk damaging their gills. It may also cause the fish further distress and proceed to thrash. Make sure to handle the fish gently, always supporting the midsection of the fish and keep your hands well away from its mouth as you flip it over!

The Wolf vs The Legend: Where Do We Catch Them?

So you know how to identify Northern Pike vs Muskie, but where should you go to catch them? That depends on the species. Below are some helpful tips on where to find Pike and Muskie.

Muskie and Pike inhabit similar areas. Both are ambush hunters hiding in thick vegetation, waiting for a meal to swim their way. While a Pike would not want to share a particular spot at the same time as a Musky, they’ll be common while fishing in areas known to hold Muskies.

Both fish prefer clear water since they’re sight-based hunters. Their similarities include preference in habitats such as lakes, shallow weedy bays or any deeper water with submerged vegetation. In rivers such as the French River, both Northern Pike and Muskie can be found around submerged timber, flats and rocky areas. They also inhabit deep-water areas of lakes, where they suspend in open water. Muskie pursue suspended prey fish over or around mid-lake structures like humps, points and sunken islands.

However, despite their similarities Muskies are pickier than their cousins. Muskie prefer large rivers and lakes. Pike are not as particular about where they live. They can be found in smaller rivers and lakes. Pike can also be caught in places Muskie tend to inhabit. Thick vegetation sections of rivers or lakes are the best places to look for both fish.

Shallow water is where Pike and Muskie will ambush unsuspecting prey. Generally, these fish will suspend or sit in the oxygenated bottom to digest their prey. They may even stay on the bottom up to a month before feeding again. During the warmer weather, food will migrate deeper as the water warms. Even though they prefer the shallows, Musky also like to keep their options open, so shallow vegetation with easy access to deeper water is always a good place to target.

How To Catch Northern Pike and Musky

Arguably the top two predatory freshwater game fish in Ontario; Big Pike and Muskie are prized by avid trophy anglers for their speed and strength. Muskie are hard to hook, thus a “fish of ten-thousand casts.” They’re difficult to track and impossible to predict. Below are some tactics for both species.

Pike, maybe the only North American fish with an attitude worse than a Largemouth Bass. Northern Pike are aggressive as they’ll strike just about anything. They’ll attack shiny presentations and are most attracted to brightly coloured and noisy lures.

Most anglers use large spoons, shallow-running lures or spinnerbaits to catch Northern Pike. Live bait works, as long as it’s the right size to attract their attention. Suckers, big shiners and shad are the best natural bait, and any lure that mimics these works well too. Northern Pike tend to strike more often.

Pike will go for much larger prey in autumn when they’re bulking up for the winter. In spring, the waters are cold and fish are slow. Pike will be happy to snack on smaller baits. Just remember to bring heavy leaders as Northern Pike have a fierce bite and sharp gill plates.

If you’re trolling, remember to set your speed to the temperature of the water and winds. If you’ve worked the water without success, move to a new spot.

Patience is key while Muskie fishing. Aim for a “follow,” the sight of a fish chasing your lure, and your dedication will be eventually rewarded with a hookup. Be ready when you do! Muskies are famous for their acrobatic displays and their skill at throwing the hook. Regardless of when the fish may strike during the retrieve; always finish with a “figure-eight.” It’s your last moment to see if there’s a follow and trigger a muskie’s predatory response.

Follow most of the tips for Pike fishing when hunting Muskie: Fish the weeds. Use larger baits later in the year. Use a steel leader to keep your lure. Recommended lures for catching Musky are bucktails, jerkbaits, diving plug and spinnerbaits. Bucktails and jerkbaits are best for casting. Cast your lure overexposed grass, weeds, rocks and submerged logs with a quick retrieve during summer.

The best live bait is the white sucker. For big Muskie use a 4/0 single or treble hook with a 12 to 14-inch sucker for their preferred bait. Cast the sucker near vegetation allowing it to swim along with the structures. Keep it just along the weed edge.

Despite sharing a similar habitat and hunting strategies; Muskie are often fewer in number and have larger hunting grounds to maintain their size. This makes them more prestigious of a catch along with their unpredictability. Big Northern Pike deserves recognition as they can fight like a Muskie on the French River. Regardless, you should be better able to tell the differences between Northern Pike and Muskie. Scout your area. Ask for local knowledge, we’re here to help! Be happy with whichever you catch and release fishing the French River, Northern Ontario.