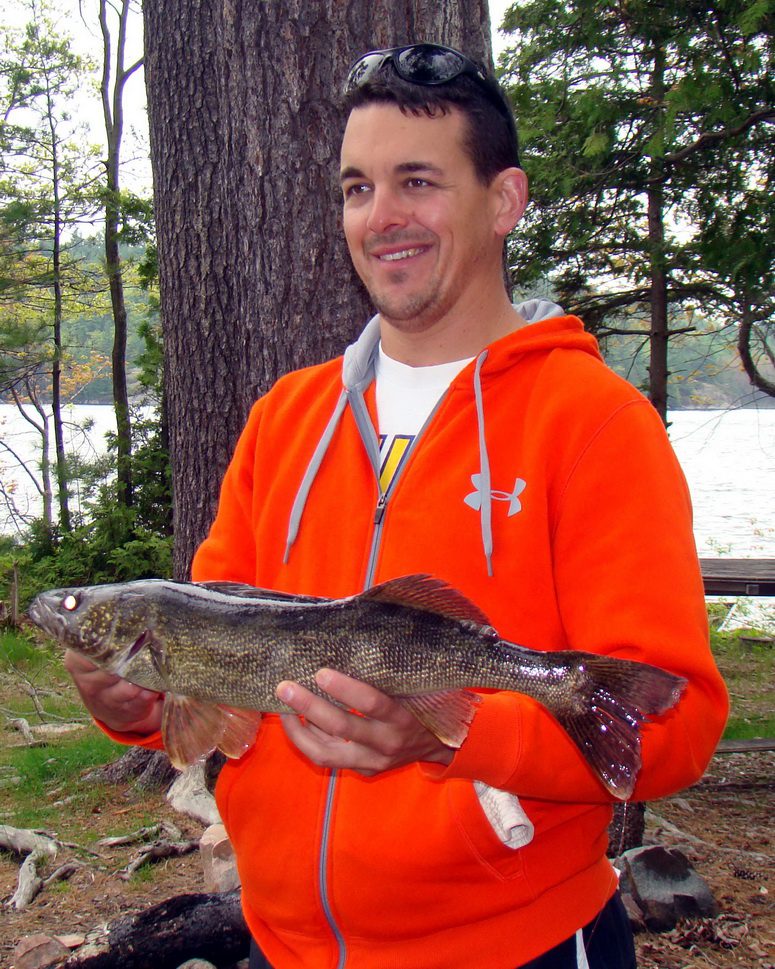 Walleye vs Sauger: How to Spot the Difference

Every fishing season, many Ontario anglers who went jigging for walleye (pickerel) may have caught sauger without ever blinking an eye. Sauger are great impersonators of their larger cousins. Often sauger school in similar habits and hunt in similar territories and structures as walleye. Because of this, it’s not uncommon to see hybrids called “Saugeye” between the two species. The differentiation could be even more confusing as sauger count towards your walleye limit, so distinguishing them from walleye can be helpful when you have a good fishing day on the French River!

As you could imagine, weight can be a determining factor when differentiating these two fish. However, it’s challenging to know which is which when they’re growing. If you catch a small walleye and a large sauger, they look almost the same. When this problem happens, there are other physical characteristics to identify the two fish species.

Another identifier between the two fish species can be their caudal (tail) fin. Walleye’s tails become transparent near the tips, whereas sauger tails are uniform in colour. Look at the fish’s tail to know what you’ve caught. This feature is an easy way to know the difference between a sauger and a walleye. If there’s a clear or whitish colour near the end, it’s probably a walleye.

Colouration on the body can also be used but weather and habitat can change the appearance of a fish. Saugers are usually spotted and blotchy, but walleye have fewer patterns. Sauger are generally more brassy or darker (almost black in some regions) coloured. Whereas walleye, tend to be olive-green and golden-yellow with darker shades to brake up the pattern. Some walleye only have one or two colours. You’ll notice these fish have a white belly and a solid top (in some cases). Mean while, saugers are almost always splotched with brown or green dots without any patterns.

As mentioned earlier, both walleye and sauger share many of the same habitats, occasionally producing hybrids between the two species. Both fish species prefer habitats that benefit their silvery-pearlescent eyes in low light conditions. They tend to remain in deeper and turbid waters during the summer months. However, sauger and walleye vary slightly in their preferences because of the biological differences in their eyes. As discovered in a 2011 scientific report, “Walleye Habitat: Management and Research Needs” by Tim Haxton (Ontario Ministry of Natural Resources and Forestry), Joshua K. Raabe (University of Wisconsin – Stevens Point) & Michael Bozek (National Park Service).

To paraphrase their work, adult sauger’s eyes are more adjusted to darker and turbid waters. Which explains their tendency to hunt around silt and muddy river bottoms. Whereas, walleye tend to favour rocky and sandy structures. However, both will also hunt around vegetation depending on water temperature and season.

In summary, remember how to spot the difference of a sauger from a walleye. Look at their size and appearance. Walleye come in golden-yellow and olive-green colour. Sauger, however, are smaller at maturity and their skin tends to be a darker brass coloured to almost black skin with distinct blackish blotches. Sauger also have spots in their dorsal fins and solid coloured tails. White tips on the tails are distinctive to walleye no matter if you catch them in the deep or near a sunken log in the French River.

For more articles related to walleye fishing visit some of my other articles below: